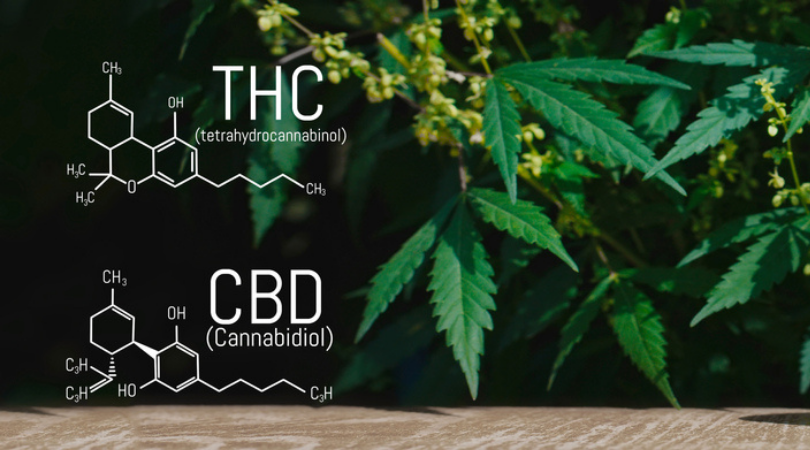 Chronic pain is the major cause of lasting disability in the USA. As the decriminalization of cannabis continues its slow march across different states, consumers are increasingly turning to medical marijuana for pain relief.

Two natural compounds of cannabis are mainly associated with pain-relieving properties. They include Tetrahydrocannabinol (THC) and cannabidiol (CBD). Both THC and CBD contain a similar molecular structure. However, there’s a minor difference in terms of how the atoms are organized, and this explains the varying effects on your body.

In this article, we dissect how these two cannabinoids, THC and CBD, individually alleviate pain. First, we’ll talk about how your body registers and deals with pain.

When you sense pain, your body produces endocannabinoids. Specifically, the body produces an endogenous cannabinoid known as anandamide. This type of cannabinoid binds itself to CB1 receptors, which in turn nullify the pain by stopping the pain signal from traveling across the entire body.

THC combats pain by mimicking the action of natural cannabinoids when the body senses a pain stimulus. Essentially, it binds to CB1 receptors in the pain-regulating part of the brain. Remember, these are similar receptors that your body’s endocannabinoids bind to. As a result, this action by THC reduces your sensitivity to pain.

The euphoric high produced by THC also triggers the brain’s reward system. This leads to the production of pleasure chemicals like dopamine. Overall, THC is not easily metabolized. Thus, it is thought of as having significant pain-alleviating properties.

Unfortunately, the CB1 receptors that THC attaches to are also prominently expressed in other sections of the brain. These include the information processing and memory centers of the hippocampus. Consequently, THC produces multiple side effects. These include:

Overall, THC distorts your perception of pain. It’s recommended for people who wish to take their minds off their chronic pain while also enjoying relief.

Unlike THC, CBD will not make you feel high. The reason is it does not attach to the same cannabinoid receptors as THC. Instead, studies show that it activates numerous other receptors like serotonin, known to affect things like mood, pain, and sleep.

Importantly, cannabidiol readily dissolves in fats, which helps its transportation through the blood-brain barrier and into your CNS. It is at the CNS where CBD can introduce myriad pain-relieving effects.

CBD activates the reuptake of a neurotransmitter called adenosine. As a result, there’s an increased adenosine concentration in the brain, which in turn inhibits pain sensations.

Equally, CBD can also stop pain signals from traveling up to the processing centers located in the brain. To achieve this, it attaches to the type of receptor generally attributed to pain and swelling.

Also, CBD may increase the levels of anandamide, an endogenous cannabinoid responsible for regulating pain. This helps to lower pain perception and boost your mood.

Cannabidiol reduces oxidative stress as well as systemic inflammation through its antioxidant properties. Moreover, CBD keeps microelements like selenium and zinc from decreasing in production. Typically, these elements play significant roles in achieving a balanced immune response and decreasing inflammation.

There is no definitive answer to the debate about whether THC or CBD is the better pain reliever. Federally, marijuana is categorized as a Schedule 1 drug. Schedule 1 drugs are considered as having no presently accepted medical application and a high possibility for abuse. This is according to US Federal Controlled Substances Act.

This limits the research that can be carried out. However, using currently available research, a combination of CBD and THC shows better promise for alleviating pain than each one individually. This is known as the entourage effect.

When the two are combined, CBD will bring its anti-inflammatory properties to the table. THC, on the other hand, will mimic the natural action of cannabinoids to reduce pain sensitivity in addition to producing a euphoric high. Anecdotally, CBD modulates the psychotropic effects associated with THC. Think of it as some sort of antidote to the anxiety and paranoia related to being too high.

You must remember that CBD and THC are not alone in the weed plant as far as medicinal properties are concerned. These two are anti-inflammatory. But if you were to consume a whole flower, you would consume a couple more important anti-inflammatory compounds at play, including terpenoids and flavonoids. In this sense, consider the whole marijuana plant as similar to a multi-vitamin for pain relief.

If you’re debating whether to pick CBD or THC for pain relief, first talk to a qualified doctor. Ideally, whatever you decide, start with a small dose and gradually increase it.

While cannabis may have pain-relieving properties, it doesn’t mean it is guaranteed to work for everybody. That’s because everyone is unique, and what works for you may not necessarily work for another person. This is particularly accurate for pain, where myriad factors like mood, stress level, environment, and existing medical conditions may come to play.