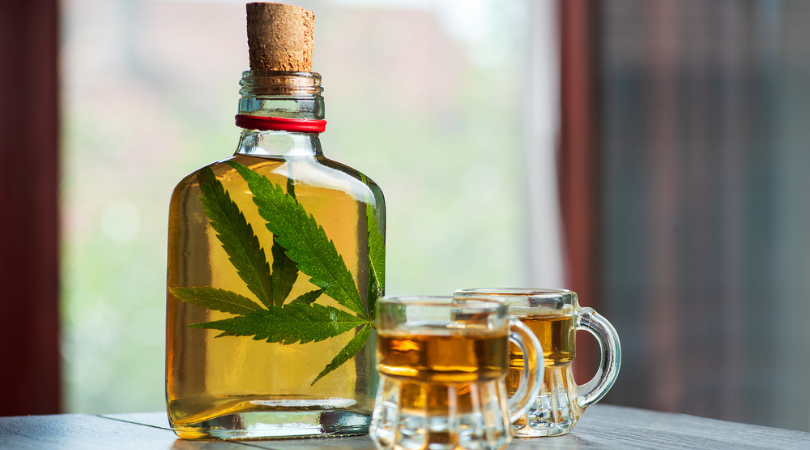 Cannabis is one of the most frequently used substances among drinkers. If you’re reading this, it means that you’ve probably tried it yourself. Some people combine it with alcohol to elevate their high, and others use it to minimize the effects of one or the other. Whatever the reason is, one question still remains unanswered: Is it safe to combine alcohol and cannabis? Read on to find out.

Effects of Mixing Cannabis With Alcohol

The effects you get after mixing the two all boil down to the order in which you took the substances. You should, however, note that when you mix alcohol with cannabis, you’ll get higher or more drunk, regardless of which substance you took first. Now that we’ve got that out of the way, let’s check out each case independently.

You will likely get a stronger high if you drink alcohol before smoking weed. This is because alcohol increases the rate at which the main psychoactive ingredient in cannabis (delta-9 tetrahydrocannabinol (THC)) is absorbed.

While this might be nice for some people, others (especially those who are not used to smoking weed) get pretty unpleasant physical symptoms. This is typically referred to as “greening out.” The general symptoms of green out include:

It doesn’t matter how much alcohol you take. Even a small amount can significantly alter the way your body takes in THC.

Take this study, for example. A group of participants drank alcohol, and another drank a placebo. About 10 minutes later, all participants used cannabis in high or low doses. Researchers found that the group that had taken alcohol had higher peak levels of THC than the other group that took a placebo. The results of this study were true for both high and low doses of THC.

That being said, this study was quite small and thus did not draw a decisive conclusion. A similar study conducted in 2010 disputed these results, showing that alcohol consumption does not have a significant effect on THC absorption.

Despite the numerous research studies on the effects of drinking alcohol before smoking weed, there isn’t much research on the opposite. There are, however, a few case studies, but they are old and somewhat inconclusive.

Let’s take this 1992 study, for example. A group of participants used either a high or low dose of weed, then drank different doses of alcohol. The study concludes that cannabis slowed down the rise of blood alcohol levels, even after the participants consumed high levels of alcohol. However, a 1993 letter to the editor disputed these results.

Essentially, though, cannabis slows down the absorption of alcohol. It might also delay the feeling of drunkenness. In most cases, using cannabis before taking alcohol does not pan out well because you won’t know how impaired you really are. In fact, in some cases, you might even feel like you’re good enough to drive, but your blood alcohol levels are way above the legal limit.

What About Mixing Alcohol With Edibles?

Taking edibles before or after drinking alcohol presents pretty much the same risks as smoking cannabis. But edibles might present additional risks since they are easy to over-consume.

Edibles have different THC concentrations, so even small amounts can produce strong highs. Additionally, alcohol can make you feel hungrier, thus causing you to overindulge in edibles. Therefore, it is advisable that you monitor the number of edibles you take. Some experts advise that you avoid edibles altogether when drinking alcohol.

Are There Any Risks Involved?

There isn’t much research on the topic, but some evidence suggests that regularly mixing the two substances might have some pretty detrimental effects. The effects of mixing weed with alcohol include:

Smoking a new cannabis strain is always a gamble; you never know what to expect. Now, imagine adding the effects of alcohol to the mix. In some cases, you might find yourself in a more altered state than you intended.

In the worst case scenario, you might even green out, as we mentioned earlier, which comes with some disconcerting symptoms. Even if you don’t green out, you might still find yourself making risky decisions or putting yourself in unsafe situations.

Like we said earlier, smoking weed before taking alcohol reduces the feeling of drunkenness. This basically means that you might end up consuming more alcohol than you intended. And in the end, you might get an alcohol overdose.

Several studies show that combining weed and alcohol can significantly affect your driving. It all comes down to the amount of alcohol you take, but considering THC’s limiting effect on the feeling of drunkenness, it’s pretty easy to overindulge yourself. Therefore, the next time you mix the two, don’t get behind the wheel.

Mixing weed and alcohol might seem pretty fun, but if you’re not careful, you might get over-intoxicated, not to mention the risk of cognitive decline. If you ever decide to mix the two substances, pay close attention to the amounts you’re consuming, especially if you’ve never done it before.

Breeders have raised the potency of weed strains over the years, progressively increasing THC levels from about 10% up to 30%. This means that the modern pot user can perhaps handle more THC than the oldie stoners could back in the day. The question on most users’ lips is, “Which cannabis strain has the highest THC content?” The answer to this question often changes because new breeds released every year usually surpass earlier records. Before learning about the weed strain with the highest THC content, let’s first look at what THC is. What Is THC? THC is an acronym for…